My June weekend break in Malta happened to be during the football World Cup. This meant that Maltese supporters of (mostly) England and Italy would be taking to the streets for noisy celebrations late in the evening following victories, or defeats, of these two teams. Which is why I chose Mellieħa in the north of the island to be as far away as possible from the mayhem. 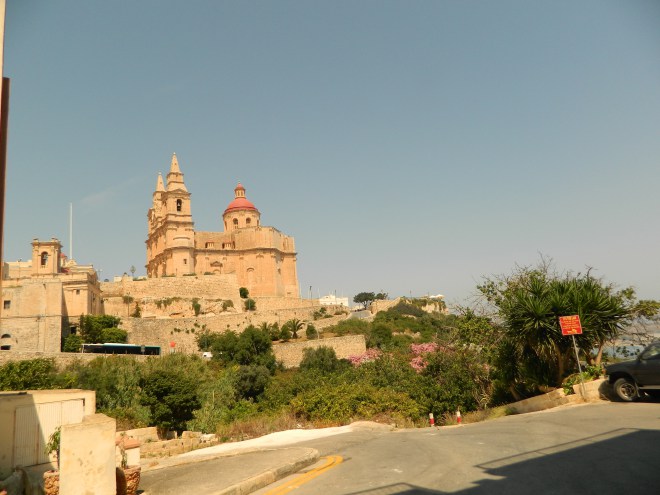 Such a beautiful village is Mellieħa! Apparently, according to a number of signposts lining the streets, this fact was also recognised by the EU through an honour bestowed on this locality: “European Destination of Excellence”. Linguistic quality may leave a bit to be desired, but the message is crystal clear: 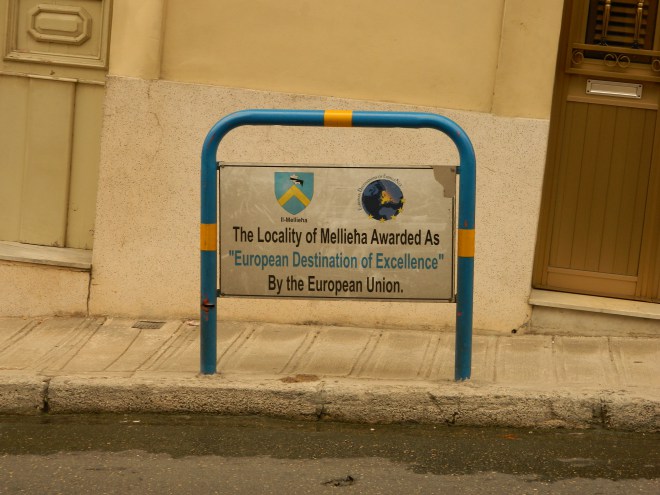 I hadn’t eaten a Gozitan ftira for ages, so my mission on my first day in Mellieħa was to cross over by ferry to the island of Gozo and get a ftira from the Maxokk Bakery in the hilltop village of Nadur. Despite the name, which means a flat loaf of bread, a Gozitan ftira is shaped like a pizza and filled with ricotta, potato slices and sheep’s cheese. You call them to place your order and a couple of hours later you go to pick it up, steaming hot, from the bakery. It’s absolutely delicious and you won’t eat anything else for the rest of the day.

The public transport system in Gozo is reputed to be more efficient than in Malta, so I decided to leave my car at the “mainland” Ċirkewwa ferry terminal with the intention of moving around by bus on the other side.

I phoned the bakery to order the ftira and boarded the ferry boat on foot. We sailed past the rocky, almost barren island of Comino in the middle of the channel between Malta and Gozo and eased into Mġarr harbour, the small fishing village which is also the main port of entry into Gozo.

It was so crowded on the bus from Mġarr to Rabat (Città Victoria), the capital of Gozo, but the ride towards this hub for all bus trips in Gozo takes only about 15 minutes. In mid June, summer had already kicked in earnestly in the Maltese islands, so by noon after I had completed some shopping it was already too hot for comfort. There was some bus network information signage that directed you to pavement no. 5 if you wanted to go to Nadur, where my ftira was baking, but pavement no. 5 was nowhere to be seen. I had to ask an official, who informed me that the next bus to Nadur would leave in 45 minutes. I reckoned that if I walked I might probably get there earlier…

Instead, I sat down in the shade in front of a snack bar next to the bus terminus, which probably does a good business out of the waiting times for buses. As I was feeling so hot and thirsty, a cold pint of Blue Label ale did me a world of good. A few rounds of Candy Crush on my mobile phone and the 45 minutes flew by in a jiffy.

My bus wasn’t even going to the centre of Nadur. I disembarked at the outskirts of the village and walked towards Triq it-Tiġrija (Racecourse Street) with the sun almost directly overhead. 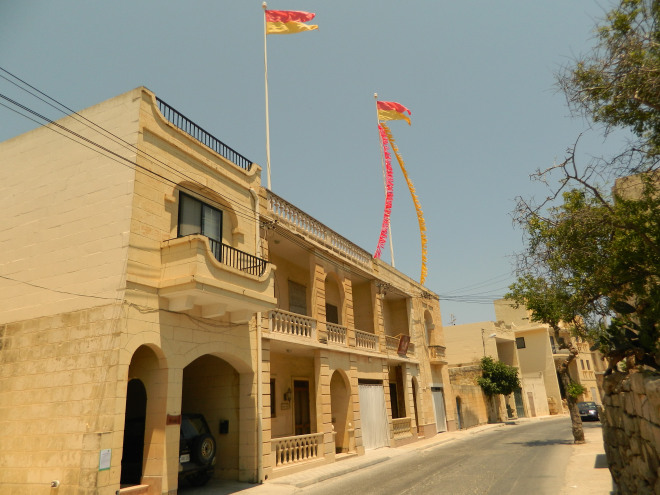 I remember the layout of Nadur very well from a project I carried out there in my’previous’ life. I’ve known about the Maxokk and their baked-in-heaven ftira since close to 30 years. You take the Triq it-Tiġrija road heading towards the village of Qala until you reach a shrine dedicated to the Virgin Mary. 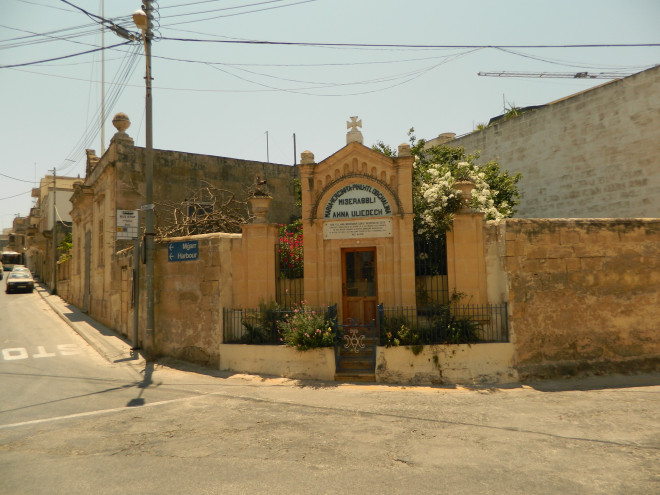 Here you turn right then left into Triq San Ġakbu (St James Street). The American Stars and Stripes adorning the rooftop of a returned Gozitan migrant family was a notable exception among various Italian and English flags hoisted by the supporters of these countries’ football teams. 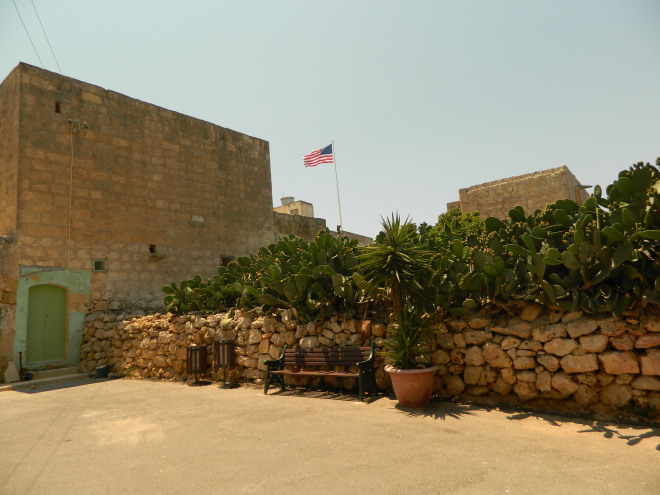 At last, the Promised Land! 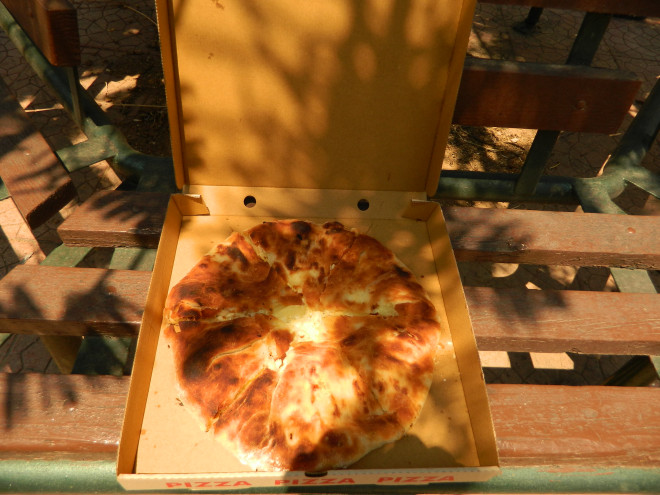 In front of the bakery there’s a little piazza with a circular bench and some shade provided by a tree. A young family were enjoying their own ftira there, but there was enough space for me to sit on the other side.

It was simply delicious! And so abundant. Such a pity that my tummy was rather filled with beer – I had to leave some of the ftira in the box and take it away with me.

With my mission accomplished, it was time to return to base. There was still a full hour to go for the next bus to Mġarr harbour, so I decided to walk instead. 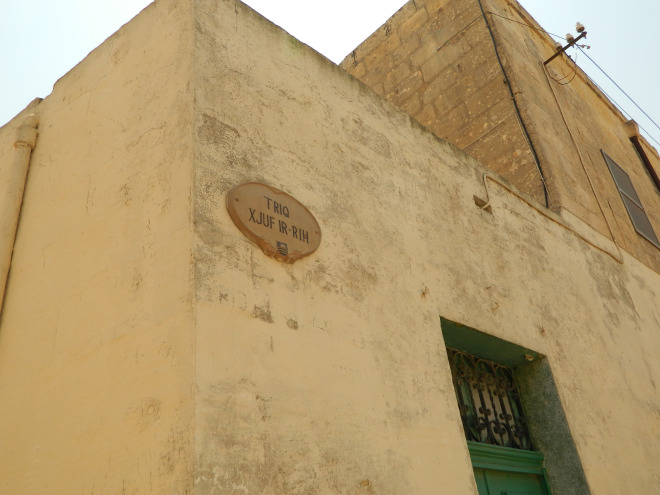 On the way I encountered this fascinating street name that I remembered from the job I had in my previous life, mentioned earlier. Triq Xjuf ir-Riħ. “Ir-riħ” is the wind, no problem with that. “Xjuf” is the plural of “xaf” – an archaic word meaning shudder. Shudders of the wind. So poetic.

I took a wrong turn, and instead of walking downhill towards Mġarr harbour I found myself heading eastwards to the village of Qala. The unexpected detour resulted in a one and a half hour walk until I reached the ferry boat, under the scorching sun of a Mediterranean June afternoon, carrying a carton containing the remains of a ftira in one hand, a camera in the other, a backpack and a sun hat that must surely have saved my face from total write-off by ultraviolet radiation.

Funny thing is, not only was I not bothered by the heat, I actually enjoyed the walk. Of course, on the boat I had to drink a barrel and a half of ice tea. 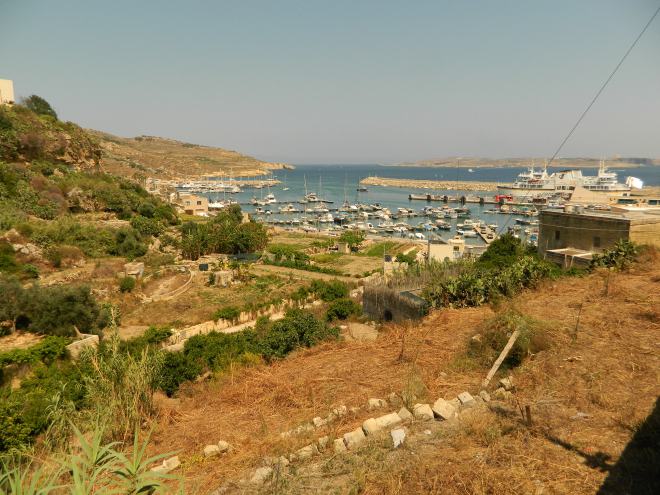 Moral of the story

Some background on Gozo

The second biggest of the Maltese archipelago, it’s all of 14 by 7 kilometres, population around 37,000. For long periods in its history, Gozo was vulnerable to raids by pirates and corsairs, including the most fierce documented attack by Turkish raiders in 1551, when practically the entire population was taken into slavery. No need to worry – it’s much safer nowadays.

You get there by boarding a breezy, panoramic 30-minute ferry crossing from Ċirkewwa in the north of Malta.

The capital, Ir-Rabat (Città Victoria) is dominated by an ancient hilltop citadel. Other notable attractions include the Ġgantija Temples in the village of Xagħra (pronounced “shah-rah”), which are among the oldest free-standing structures in the world. The Azure Window in Dwejra is worth a visit. Over the years, the horizontal “beam” of this natural geological structure has been collapsing due to natural erosion, so you’d better hurry up and go see it while it’s still there. [Post scriptum: Alas, in March 2017, it finally succumbed to a heavy sea storm, leaving just submerged broken pieces of rock for divers to explore]. Stay in a hotel or in a self catering rural villa, and go out to explore hills, valleys, cliffs, sleepy villages, magnificent churches, and of course some spectacular beaches.