I’m not into skiing. Too much equipment to carry. Besides, I prefer to run rather than slide down a slippery slope. It’s simply not my type of environment.

I can understand, however, that many others think otherwise. This includes my ‘better three quarters’ – my wife, my daughter and my son. We booked a few days in the well known skiing resort of Kranjska Gora in Slovenia. There I would do some running of my own while they would aim to ski till they dropped. I would fill up the rest of the day after my run by doing some exploring of my own around Slovenia.

The plan worked well except for one important detail. It seems I can’t run anymore due to some rather serious structural damage I have discovered in my hip joints, caused by too much long distance running. I’m still adjusting to this life-changing new situation, but that’s another story. So I had to satisfy myself with the exploring.

The village of Kranjska Gora itself is very small – a church, a pedestrian area, some kiosks that seemed like they had carried the traditional Christmas market on until February, some hotels and holiday villas… the main attractions are the ski slopes, the surrounding mountains, and a lovely little lake up the road that leads to the highlands.

The lake up the road, a short distance away from the village centre, is called Jasna. It’s practically two small lakes joined by a narrow strip of water. When I went there it was mostly frozen over. 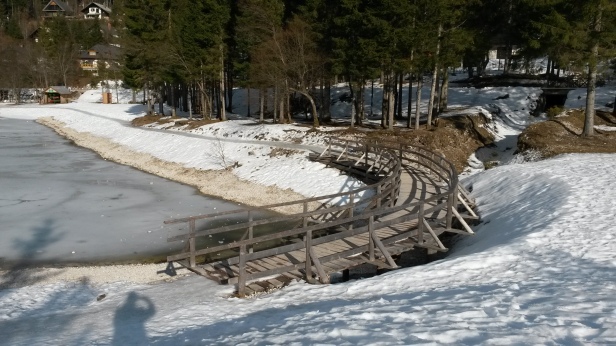 Pity I didn’t have time to drive up to the highlands right next to the resort. Actually, I did have the time, but I used it to go exploring elsewhere, much further away, instead of our own back yard which may well have also been interesting. Oh well.